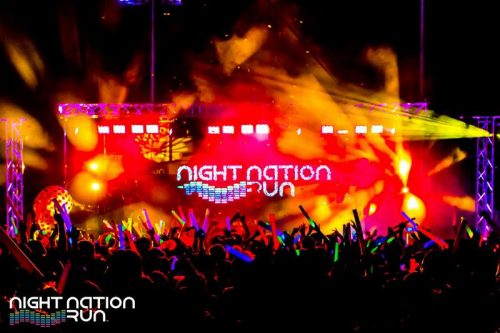 We had a chance to catch up with DJ Scuffs after the event and here is what he had to say:

Q: What was the Night Nation Run event like?

A: It was a super dope event. So much energy from start to finish. Essentially, it’s a big music festival with a 5K race course going through it. There are multiple sounds and DJs playing all day and through the night with some DJs actually positioned on the course to help keep you pumped and moving all the way to the main stage.

A: An amazing experience, a cool concept, and one of the best events I’ve ever played at and been a part of.

Q: When you create a Fit Radio mix, what do you always make sure to do?

A: I always make sure it’s a perfect combination of style, fun, energy, and it keeps you wanting more.

Learn more about Night Nation Run and find upcoming runs near you here! Fit Radio users get an exclusive $25 admission price (60% off the regular ticket pricing) using the coupon code FITRADIO at checkout for ALL RACES! Click here to find a Night Nation Run near you! 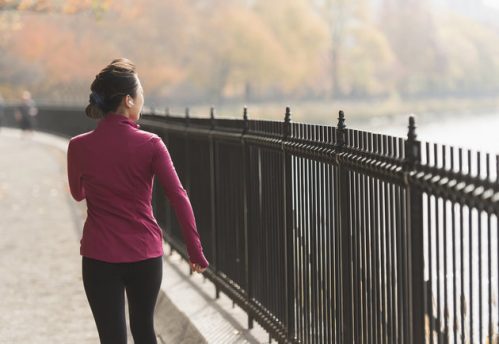 Meet Brandy M. Brandy just ran the longest distance of her life (without stopping) all thanks to Fit Radio. Here is her story:

“I did it! I officially ran the longest distance I ever have before (without) stopping! Just did a 10k (6.2 miles) and finished in about an hour at a 10.5 minute mile, which I am extremely happy with! My “personal record” had nothing to do with time, it was simply to FINISH, ideally without stopping, which I DID!!! The Texas heat is no joke in the middle of the afternoon. It was HOT, I was tired and I already worked out at did weights at the gym this morning.

BUT I bought this beautiful diamond finishers medal to do a “virtual run” with some of my ADPi sisters who live in different places. I told myself I would run a 10k for the medal before my 15k next weekend, so today was the day that it was NOW OR NEVER! (I even had the willpower to not open the medal package until I finished my run!)

The trail was really empty today so it made it MUCH HARDER to run and at the halfway point I was TIRED! I knew that I could stop and walk because no one would know but me… But I wanted to prove to myself that I could do this run, alone, without stopping. Talk about SELF MOTIVATION & DISCIPLINE!

Although my body was tired I knew it was MIND that I had to convince to keep going so I kept telling myself “This is so easy”, “You’ve got this girl”, “Be proud of yourself”, “Keep going”, “You’re almost there”… Positive self talk really helped and I have my yoga practice to thank for that.
Just know that if you want to do something, YOU CAN DO IT. I was not a runner before I took on this challenge, but I was determined & motivated… That’s what it takes. Set new goals, determine how to achieve them & then take action to make your goals turn into accomplishments! I couldn’t have done it without Fit Radio!”

Do you love Fit Radio? Tell us about your experience for your chance to be featured! Click here to learn how. 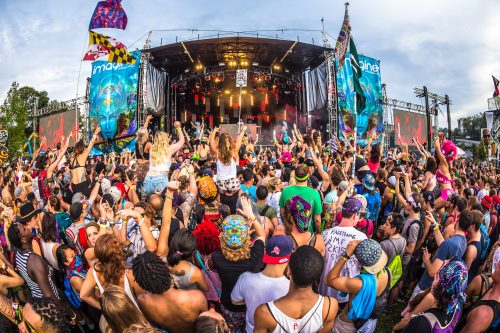 Stream all of your favorite festival mixes right within the Fit Radio Workout Music app!

Calling all EDM fans! We have just launched our new “Festival Station” on the Fit Radio app!

For the next few months, Imagine Music Festival will TAKEOVER the new Festival station on Fit Radio – bringing you exclusive, high-energy workout mixes to get you in the music festival spirit! With DJs like Adventure Club, Benny Benassi, Borgore, Dillon Francis, The Disco Biscuits, Excision, Nero, Gramatik, Zeds Dead, Steve Angello, and more – you can look forward to some amazing new mixes! See the full line up here. 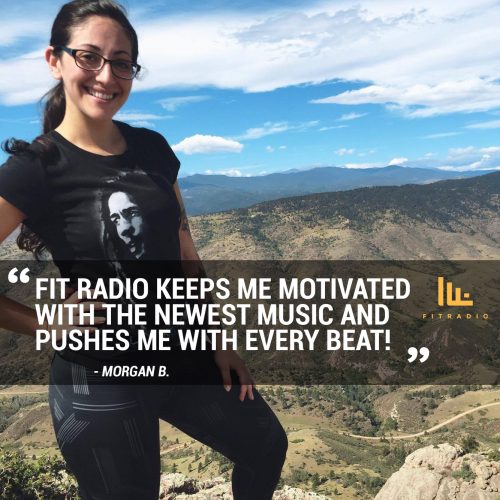 Meet Morgan B. This is her Fit Radio Story:

My name is Morgan and I currently live in Colorado. For me, Colorado is the best place for anyone who is super active and loves the outdoors. Personally, my favorite activities include camping, hiking (Summer or Winter), and bike riding.

I love Fit Radio because it always keeps me motivated with the newest music and pushes me with every beat!

Do you love Fit Radio? Tell us about your experience for your chance to be featured! Click here to learn how. 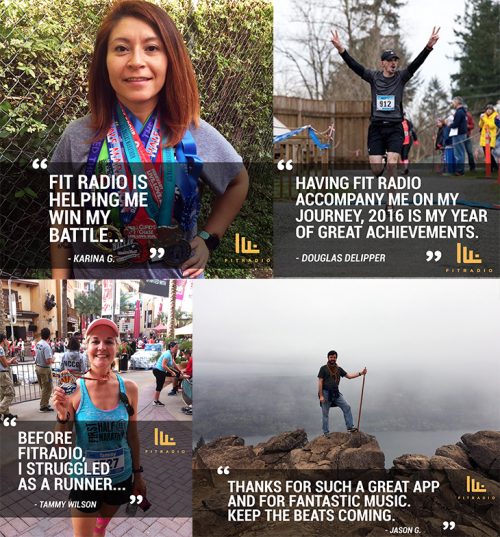 Has Fit Radio helped you reach your fitness goals? We want to hear from you! (And congratulations by the way! 😉 ) Tell us about your experience for your chance to be featured in your own personal spotlight on our blog and social media! All you have to do is answer the questions below, email them to team@fitradio.com along with 1-3 of your best photos to accompany your feature.

Thank you all for your support of the #FitRadioLife! Keep it up! 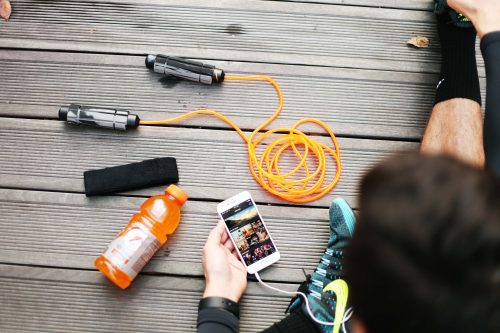 Learn more about Billy The Kid and listen to his latest mixes here. 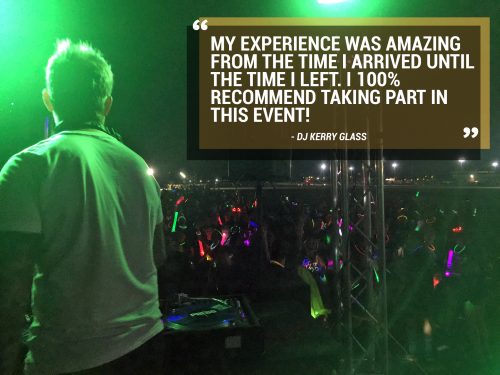 We had a chance to sit down with Mr. DJ Kerry Glass about the event and here is what he had to say:

Q: How was your overall experience DJ-ing at the Fit Radio Stage at Night Nation Run in LA?
A: My experience was amazing from the time I arrived until the time I left. The entire Night Nation Run staff was friendly and extremely accommodating. The crowd was probably one of the happiest and most excited crowds I have ever seen in my life. 5 Stars!
Q: What was different about performing at this event?

A: The ENERGY from the crowd was insane throughout the entire event. Whatever interaction you gave to the crowd, they would give right back to you ten fold.

Q: Would you recommend our Fit Radio Fam take part in the NNR events?
A: Everything about NNR was AWESOME! From their friendly staff, to their impressive stage production to the incredible audience. I 100% recommend in taking part of the event and hope to be a part of it again in the years to come. NNR Rocks!
Learn more about Night Nation Run and find upcoming runs near you here! Fit Radio users get an exclusive $25 admission price (60% off the regular ticket pricing) using the coupon code FITRADIO at checkout for ALL RACES! Click here to find a Night Nation Run near you! 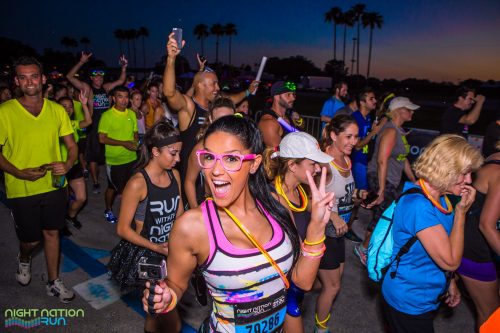 Experience Fit Radio DJs DJ Kerry Glass in Los Angeles and DJ Scuffs in Toronto on the Fit Radio Stages this July at Night Nation Run! The World’s First Running Music Festival will journey you through an illuminated racecourse to multiple on-course performance stages, each with its own unique, exhilarating party, finishing with an explosive main-stage after-party featuring top headliner DJ’s and special guest celebrity performers!

FitRadio users get an exclusive $25 admission price (60% off the regular ticket pricing) using the coupon code FITRADIO at checkout for ALL RACES! Click here to find a Night Nation Run near you! 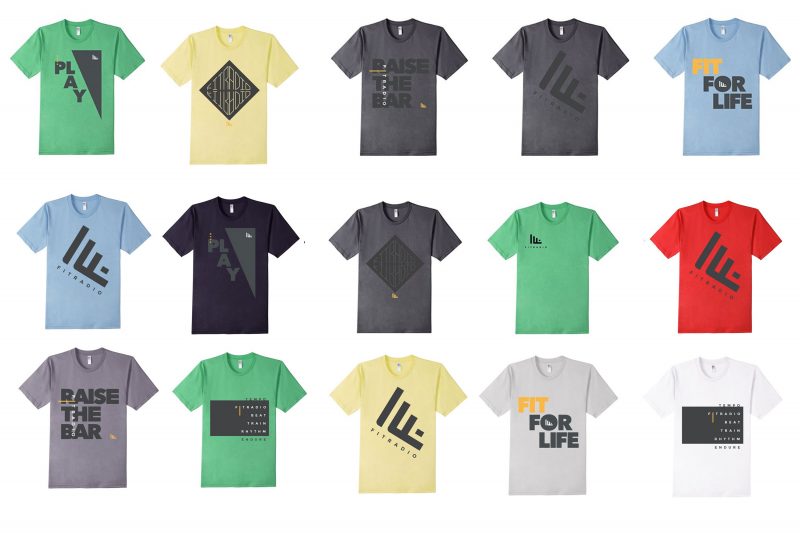 Get Your Fit Radio Swag!

Rep your love for Fit Radio with our brand new T-Shirt designs available for purchase!