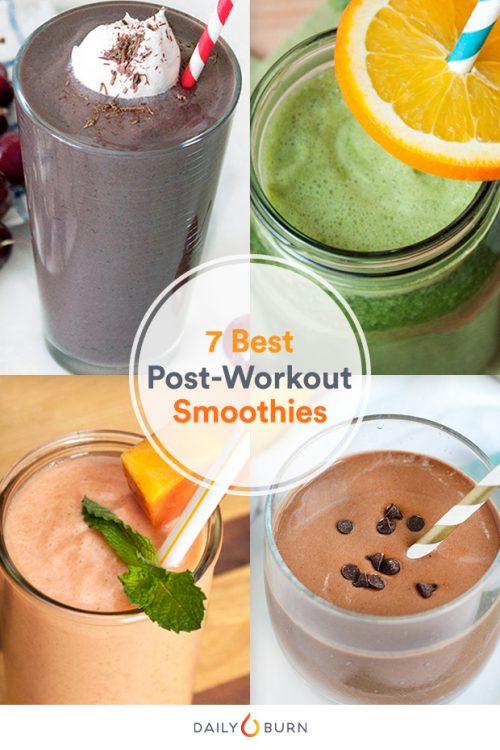 So pull out your blender! We’ve got seven different smoothie recipes to chase down any and every workout, from yoga to HIIT.

Whether you torched it at an hour-long spin class, or pulsed the heck out of your glutes at barre, nothing is more satisfying than a delicious post-workout smoothie. But instead of reaching for the same-old protein smoothie, why not tailor your drink to your precise workout — allowing you to hit the specific nutrients and electrolytes your body needs.

According to Stephanie Troxell, Daily Burn Fitness/Nutrition Coach, exercise causes our bodies produce a little something called free radicals, also known as destructive molecules that cause inflammation. “Too many free radicals may lead to oxidative damage,” Troxell says. Reaching for a smoothie complete with anti-inflammatory ingredients may help fight oxidative damage, in addition to helping your muscles recover.

Orange Kale Protein Green Juice
“A spin class usually leads to a lot of sweating. Including citrus fruits, like oranges, in your smoothie will help replace water and potassium lost through sweat,” Troxell recommends. Our Orange Kale Protein Green Juice is loaded with iron, beta-carotene, vitamin C and fiber. Made with fresh orange, kale and spirulina (an excellent vegan source of protein) this smoothie is just the right cross between protein smoothie and green juice. Photo and Recipe: Perry Santanachote / Life by Daily Burn

Black Forest Smoothie
HIIT workouts may be shorter than your run or spin class, but they pack serious intensity — which can lead to inflammation and free-radical formation, Troxell says. But including more antioxidant-rich foods, like berries, into your smoothie can help. Troxell recommends using deep red or purple berries, such as blackberries, cherries or blueberries. One sip of this decadent Black Forest smoothie, and you won’t believe how healthy it is. Made with frozen dark sweet cherries and chocolate protein powder, nothing is more rewarding after HIITing it. Photo and recipe: Perry Santanachote

Matcha Pear Green Protein Smoothie
Popeye was eating spinach for a good reason. It wasn’t just the super power strength spinach gave him that kept him coming back for more. According to Troxell, the leafy greens are a good source of magnesium, a mineral that is lost in sweat. Spinach also provides carbohydrates for replenishing glycogen stores. There’s no better way to glorify these greens than with our Matcha Pear Green Protein Smoothie. Matcha green tea powder provides an extra punch of antioxidant power; pear lends some natural sweetness. You can also check out Green Kitchen Stories’ Green Rehydration Smoothie (off of their new Green Kitchen Smoothies Cookbook). The green smoothie features handfuls of the leafy greens, pea protein powder, fresh ginger and a banana to make it creamy. Photo and recipe: Perry Santanachote

Serrano Pineapple-Papaya Chia Smoothie
The breathing and stretching exercises in yoga already help to reduce inflammation and oxidative damage in the body. But you can double its benefits by downing this Serrano Pineapple-Papaya Chia Smoothie after all those downward dogs, Troxell says. This fruity drink also features hydrating cucumbers, fresh ginger, lime juice and avocado oil. Anti-inflammatory ingredients, like ginger and chia seeds, can fight off free radicals. Photo and recipe: Janie Hoffman / Mamma Chia

Banana-Oat Protein Smoothie
All that pulsing and flexing are sure to have your muscles fatigued! “Pair a fast-digesting carb, like a banana, with a protein source, like peanut or almond butter, for a delicious post-workout treat that will quickly replace your energy stores,” Troxell says. Our Banana-Oat Protein Smoothie uses two bananas and rolled oats, which provide a dose of fiber and protein. Photo and recipe: Perry Santanachote

Read the full article at http://DailyBurn.com