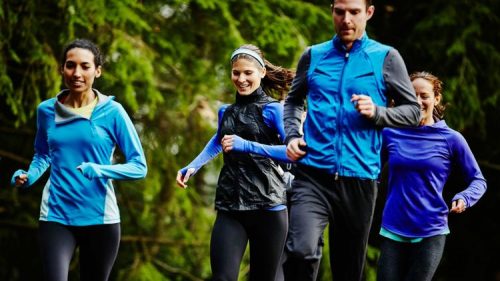 Now here’s a contagion that might not be so bad to encounter. A new analysis of the running habits of about 1.1 million people reveals that exercise is indeed contagious — though its communicability depends on who’s spreading it.

The findings, published in the journal Nature Communications, also reveal that certain relationships are better at spreading the running bug than others — and could have implications for the study of other social contagions, such as obesity and smoking.

In recent years, researchers in a wide range of fields — from economics and politics to medicine and computer science — have begun to investigate the ways in which many of our individual decisions affect the decisions of our peers, and how behavioral changes may spread through a social network.

“If behavioral contagions exist,” the study authors wrote, “understanding how, when and to what extent they manifest in different behaviors will enable us to transition from independent intervention strategies to more effective interdependent interventions that incorporate individuals’ social contexts into their treatments.”

Creating health, exercise, and other interventions that effectively could harness the social network to maximize their benefit would be a real game-changer, researchers say. But it’s been difficult to draw conclusions from studies based on self-reporting surveys (where participants may not be fully honest or aware of their own behaviors) or laboratory experiments (which may not fully capture the real-life complexities of causal relationships within social networks).

So for this paper, Sinan Aral and Christos Nicolaides of the Massachusetts Institute of Technology used exercise tracker data to study the running and exercise habits of around 1.1 million people in an actual global social network. The runners had formed about 3.4 million social network ties; the researchers analyzed the 2.1 million or so ties for which they could pinpoint geographic location and weather information for both users.

Over five years, these social media users ran a collective 350 million kilometers — and their runs were all automatically posted online for their friends to see, reducing the issues that come with self-reporting.

The effect is strongest on the same day and appears to diminish with time, the authors wrote.

“Social comparisons may provide an explanation for these results,” the study authors wrote. Social comparison theory, they added, “proposes that we self-evaluate by comparing ourselves to others.”

There are possible explanations in the scientific literature for the gender divide too, the scientists added.

“For example, men report receiving and being more influenced by social support in their decision to adopt exercise behaviors, while women report being more motivated by self-regulation and individual planning,” the study authors wrote. “Moreover, men may be more competitive and specifically more competitive with each other. Experimental evidence suggests that women perform less well in mixed gender competition than men, even though they perform equally well in non-competitive or single sex competitive settings.”

“The granularity and precision with which exercise tracking devices record real-world health behaviors portend a sea change in our understanding of human behavior and social influence at scale,” the study authors wrote. “Compared with prior studies, which relied on imprecise and frequently inaccurate self-reports, the potential for these kinds of data to extend our understanding of social behavior in real-world settings is difficult to overstate.”

It also highlights the fact that looking at “average” social influence may not be the most helpful indicator, especially when — as this study showed — influence on any given branch of a social network is not necessarily a two-way street.

“Different subsegments of the population react differently to social influence,” the authors said. “Such differences suggest that policies tailored for different types of people in different subpopulations will be more effective than policies constructed with only average treatment effects in mind.”

Read the full story at LATimes.com

Get your full exercise experience in one app at fitradio.com.