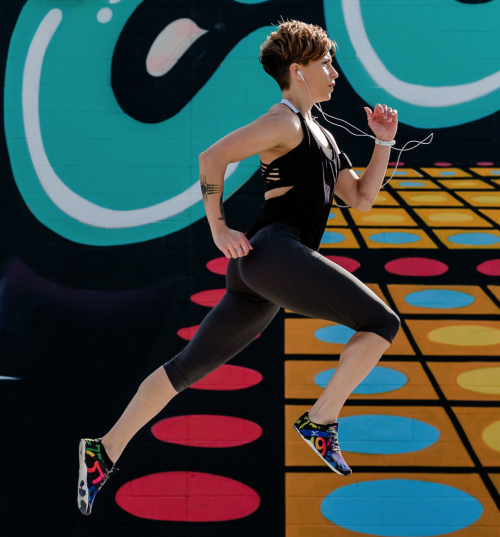 Hey, guys! Coach B here. Director of Fitness, crazy motivator, terrible joke-maker, and overall inspiration queen here at Fit Radio. I’m one of our only coaches that has multiple workouts in every section we offer so odds are, you’ve heard my voice and HOPEFULLY have been motivated to stay strong and moved to push your limits by me too. That’s my goal.

I grew up in a house of sport. My dad is a two-time Olympic cyclist, and my mom is a two-time national champion cyclist. As you can imagine, it was hard NOT to be involved in fitness on some level! I tried almost every sport imaginable, however, before landing on the love of my life. From the more common basketball and soccer to less participated ballet and horseback riding, I was a Jill of all trades until my freshman year of high school when I found Cross Country. Running was it. Right after practice number one, I knew I wanted to do it full time, and I wanted to be GOOD at it. Keep in mind, my first practice I ran 15 minutes for the first time in my life and thought I was going to die – I had a long way to go. 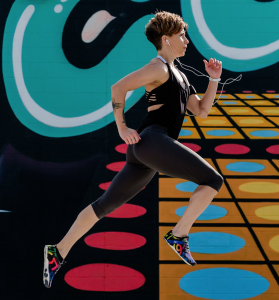 I got there though! Ended up with a scholarship to the University of New Mexico, finished my collegiate running at Portland State in Oregon, and pursued it after with a brief stint that we’ll classify as “semi-pro” with the Atlanta Track Club. Throughout my running career, every step of the way was riddled with injuries. I have had to come back from virtually every injury possible (ask my physical therapist…”What did you do NOW?” *sympathetic yet sarcastic eye roll*). Among those were two knee surgeries that laid me out for months on end. Each time, I made the comeback. Each time, I was stronger than before, hungrier than before, grittier than before. I’ll admit though, each time it also took more out of me. The comebacks became harder, longer, more emotionally draining. I went through some really dark days over my years with competitive running but I wouldn’t change it for the world. The strength I found I had, and the lessons I learned along the way are priceless. I am who I am from the struggle – simple as that.

I became Coach B when I was 19. Always a natural leader throughout my life, and always trying to push my teammates further, coaching was a logical transition for me. I fell in love with it immediately and knew it was something I wanted to do as often as I could, if not for my whole life. I’ve been so influenced by my coaches, y’all know who you are, that I wanted to be that positive impact on others. Starting with high school coaching, I transitioned to volunteer coaching at UCONN while I pursued my own running dreams, then found myself moving to Atlanta and worked with the Atlanta Track Club for my first two years. Coaching has brought and continues to bring, so much joy to me. Inspiring and recognizing the potential in others is something I know I was made to do. And in comes Fit Radio… 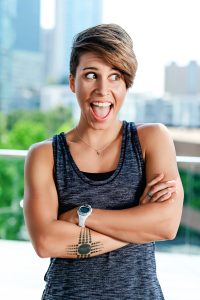 The opportunity for this job came into my life at a particularly low point and I needed it more than ever. I decided to hang my spikes up early in 2016 after being told I was going to need to take 6 months off running entirely to let my knees heal. Being a competitor at heart, I knew this wasn’t the true end for me but it was a really tough blow. Then I found cycling. I ended up racing a full season that year un-injured for the first.time.ever. It was epic…until I crashed. A concussion, a gnarly gash on my elbow and elsewhere, and a broken rib later, I was officially initiated into the world of cycling! But there I was again, hurt. And cycling “hurt” typically means trauma, not overuse. Ouch. So, down on myself, unable to workout, coaching sporadically, and unhappy in my career at the time, a friend told me about the new Director of Fitness position open at Fit Radio. It was a match made in coaching, fitness, creativity, and life goals heaven. 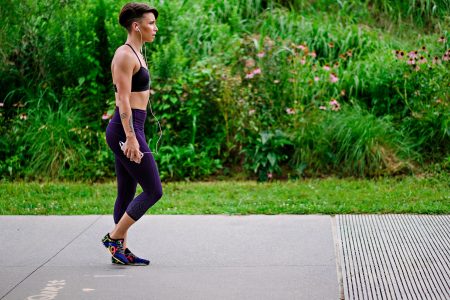 Life is Good, but We All Have Moments

Not everyone can say they are blessed to have a job that feels made for them. I consider myself incredibly lucky to be a part of this amazing company and team. Not only do I get to write workouts and coach thousands of people through them on a daily basis, but I get to do it alongside other passionate coaches and a strong team who are some of the most innovative and driven people I’ve ever met. #SquadGoals 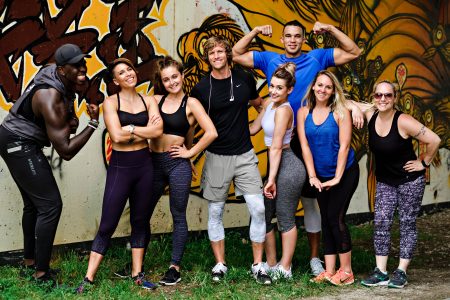 In my blogs, you can expect inspirational stories from me and ways to use exercise to elevate your life, especially through tough times. You can count on me to be real – even when it isn’t the prettiest. We all have our moments and I pride myself on being authentic, always.

I can’t wait to workout with you! I wanna see where those limits REALLY are 😉 Until then, check me out on Instagram @runthisb – because, you know, I run this!