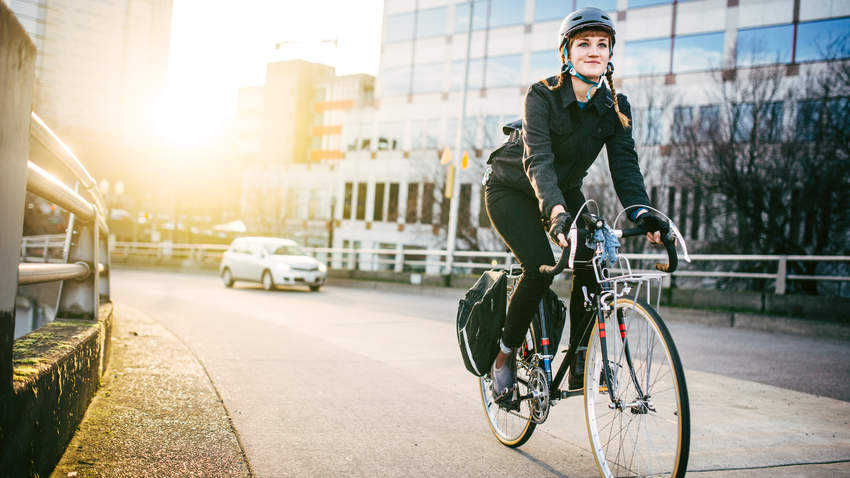 Cycling is on the rise. Bike shares are popping up in cities across the country. An increasing number of workers are commuting on two wheels. And more folks are pedaling for fresh air and fitness. The number one concern among all of them? Traffic—specifically staying safe when navigating streets busy with cars.

The good news is that a few bits of bike safety knowledge go a long way in keeping you out of harm’s way. Here’s how to avoid common causes of car-bike collisions.

When a driver hits a cyclist, the first words out of his mouths are inevitable, “I didn’t see her!” Though the onus is on drivers to be aware of their surroundings, you can take a few easy steps to make them aware that you’re there. This is especially important in low-light conditions when accidents are most common. Stats show serious accidents happen most often between 6 p.m. and 9 p.m.

Get daytime running lights. The latest trend in cycling is to run daytime running lights—white in the front and red in the rear—just like motorcycles and many cars. Portable, rechargeable lights like Bontrager’s Ion 100 are intense enough that cars can see you from nearly a quarter mile away. They also have a flashing mode, which gets the attention of distracted drivers. One study found that the incidence rate of bicycle accidents with personal injury to the rider was 19% lower for riders using permanent running lights. Well worth the 40 bucks they cost!

Wear reflective clothing. It’s easy to blend in with the surroundings when you’re pedaling a skinny bike along the roadside. Create a contrast by wearing “hi-viz” clothing or accent pieces like vests, a helmet, and gloves that make you easier to see. Research shows it can lower your risk of run-ins with cars by 40%. When the light is dim, wear cycling-specific reflective accessories.

Follow the rules of the road. Flow with (never against) traffic. Obey street signs, traffic signals, and road markings. Hold a straight line as much as possible (obviously skirting around obstacles like potholes and storm grates) and avoid weaving in and out of parked cars. Signal your intentions to turn—simply put your arm out and point—so cars know which direction you’re going.

The majority of accidents happen in intersections. The most common scenario is a car turning right turns into you without seeing you. Other common scenarios include an oncoming car turns left into you as you’re going straight. Or a car simply pulls out into the intersection directly in front or into you. To avoid these, you can do the following:

Ride further left. Riders often hug the edge of the road as far right as possible. But in traffic, especially when you’re moving about the same rate of speed as the cars, it’s safer to move into the lane where you are fully visible. Riding in the lane is also smart when the road is simply too narrow for cars to pass you at a safe distance.

Stay out of the blind spot. When coming to a stop at a traffic light or stop sign, avoid stopping right next to the car to your left. The driver can’t see you and may turn right into you. Stop behind the car so you can see its blinkers. If the driver fails to use her blinkers, you’ll also be able to see the car turning before it turns into you.

Be cautious passing on the right. When you’re riding to the right of traffic, especially if you’re in a bike lane, you will likely find yourself occasionally passing cars on the right-hand side, especially when traffic is slow. It’s best to avoid passing on the right. But if you do, be vigilant and keep your eye out for intersections, driveways, parking lots, and other places cars may be turning right (or crossing traffic and making a left from the opposite direction), so a driver doesn’t inadvertently turn right into or in front of you.

Make eye contact. When at an intersection with cars coming in from either side, make eye contact with the drivers to be sure they see you before pulling into the intersection. If they don’t appear to see you, wave an arm to get their attention. (Lights help a lot here, too.)

Give yourself a door buffer

When riding past parked cars on your right, give yourself ample space to avoid being “doored” by someone opening their car door into traffic. It helps to keep an eye on side view mirrors, as well, since you can see cars that are occupied, where someone may step out without looking.

Read the full article at Health.com.