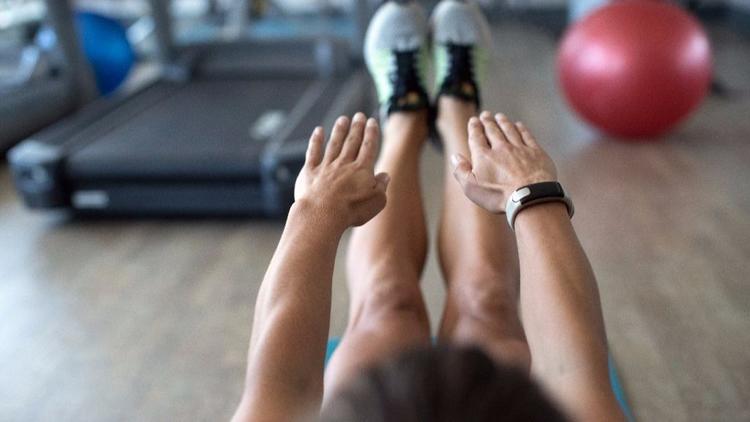 If there’s any time for excuses, it’s during the holidays when sweaters come out, socializing heats up and the overindulging begins.

With so much to do, it can be hard to imagine a way to squeeze in the American College of Sports Medicine’s recommended fitness guidelines of 150 minutes of moderate activity or 20 to 60 minutes of vigorous cardio three times a week, plus strength training and stretching. So many simply abandon their exercise routine until the new year, says Los Angeles-based trainer Mike Donavanik, making it harder on themselves in January.

“They start out defeated, already shutting down the possibility of staying active and fit during the holidays,” Donavanik said.

Research shows that half the weight you gain over the holidays takes until the summer months to come off — if it comes off at all.

Rather than giving up and giving in to the Spanx, Donavanik advises his clients who have an existing fitness routine to compress their workouts into short but intense sessions that get your heart rate up and build strength.

“if you can fit in 20 minutes [of circuits] three or four times a week, that will hold you over until January,” Donavanik says, when you have more time and energy to tackle those fitness goals.

Here are some pro tips for getting the maximum fitness benefits in the shortest amount of time over the holidays:

If that hourlong cardio class doesn’t seem likely given your to-do list, try squeezing in 15 to 20 minutes of high-intensity interval training (HIIT) on the treadmill or at the park, raising your heart rate to 80% of maximum in one running interval for three minutes, then lowering it to 60% in the following three-minute recovery period by walking or slowing to a light jog, says Walt Thompson, the American College of Sports Medicine’s president. Repeat the sprint-and-recover intervals three or four times each workout.

When you travel over the holidays, it’s hard to keep up with your strength routine. Donavanik recommends picking a handful of basic bodyweight-based strength exercises such as lunges, squats, pushups and plank-ups that can be done anywhere — at your mom’s house or between stints on Amazon.com. Set a timer on your phone and crank out 15 reps of each, rest for the remainder of the minute and then switch to the next exercise. Repeat the exercises in this every minute on the minute (EMOM) circuit three times a session at least three times each week.

Just because you can’t manage a big workout doesn’t mean you can’t squeeze in mini-workouts throughout the day. Called “exercise snacking” in the fitness industry, it means squeezing in at least 10 minutes of exercise at a time two or three times a day when you can find the time, such as a few calisthenics when you wake up, a brisk walk at lunch, and a longer walk or jog when you take the dog out in the evening. You will get the same benefits of a longer session, Donvanik said, if you commit to it.

During the holidays it’s easy to prioritize shopping, cooking and cleaning above all else. “We need to make sure that during this holiday period we make appointments for ourselves for exercise,” Thompson said. If you know you have a party or family gathering coming up on a Saturday evening, make sure to schedule an exercise session on your calendar for that afternoon. Then you feel better and can indulge without all the guilt, Thompson said.

When in doubt, just move. It’s easy to say you don’t have time, Thompson said, but everyone has a few minutes that he or she can devote to feeling better, even if it’s parking far from the store where you’re shopping, dropping into pushups during that Christmas special or walking through neighborhoods looking at holiday lights. “Any time you can devote to a structured exercise program is beneficial,” Thompson said.