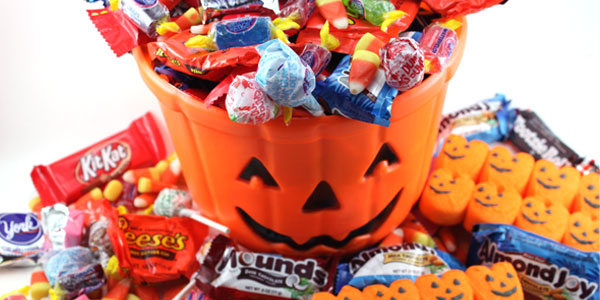 Most days of year, we’re all about the quinoa and kale. But then there are those special times—like Halloween—when it’s fine to enjoy a sugary treat (or two). That’s because when you eat right most days, an occasional splurge is no biggie.That’s not to say you should scarf down handfuls of the kiddies’ stash or the office leftovers. Just keep in mind your calorie intake, and limit portions.

This quintessential Halloween candy is more than 100 years old; it was first released by the Wunderlee Company in the 1800s. The reference to autumn is obvious: the candies are shaped like a kernel of corn in harvest colors. Each morsel has a mere 7 calories (if you can eat just one).

Each piece of the pumpkin-shaped mellowcreme version has 28 calories.

Fun fact: According to the National Confections Association, more than 35 million pounds of candy corn will be produced this year. That’s 9 billion pieces (63 billion calories), enough to circle the moon almost 21 times.

Fun fact: Kisses first appeared on candy-store shelves in 1907. No one knows where the name came from but some believe the moniker mimicked either the sound or motion of the chocolate being deposited onto the conveyer belt during manufacturing.

The favorite of E.T. and extraterrestrials everywhere, one fun-sized pouch contain about 70 calories.

Fun fact: Rumor has it that the makers of the movie E.T., which popularized the candy, first wanted to use M&Ms or Skittles but were turned down by the famously secretive Mars Company. Sales soared 65% in June of 1982, when the movie was first released.

This classic, 80-year-old treat turns into a 90-calorie pumpkin at Halloween. One regular peanut butter cup is 105 calories.

Fun fact: Hershey’s makes enough of this favorite in one year to give one cup to every single person in the USA, Japan, Europe, China, Africa, and India.

Halloween varieties of this famously “interactively candy” include glow-in-the-dark dispensers topped by pumpkins and witches heads. The pastel-colored candy inside is only 35 calories per roll.

Fun fact:  A Halloween dispenser costs only $1.99, including three rolls of candy, but earlier versions of the dispenser, which debuted in 1927, are collector’s items. A 1982 World’s Fair Astronaut B Pez Dispenser reportedly sold for more than $32,000 on eBay. The dispenser was one of only two made, prototypes for a product that never made it to retail shelves.

A fun-size version of the U.S.’s best-selling candy bar containing the traditional chocolate, nougat, peanuts, and caramel has only 71 calories. The pumpkin-shaped Halloween special has 90 calories.

Fun fact:  Snickers bars were introduced to the market in 1930 by the Mars Company and were named for a favorite horse of the Mars family, which started and continues to run the candy empire.

Distinguished as the first non-melting chocolate, Tootsie Rolls are already made in sizes perfect for Halloween bags. One piece: 23 calories.

Fun Facts: Due to their non-perishable nature, Tootsie Rolls have been a staple of U.S. military rations since World War II. To date, at least three scientific studies have tried to solve the mystery of how many licks it takes to get to the center of a Tootsie Roll lollipop, all unsuccessfully.

During Halloween season, this classic chocolate bar also comes in “Pumpkin Singles”—the same milk chocolate and crisped rice, but shaped like a pumpkin. Each 1.2-ounce piece has 170 calories and a fun size bar has 60 calories.

The Halloween version of this popular chewy, fruity candy is called Mummy Mix. Still oval-shaped, but in a limited edition flavor mix (lemon, orange, grape, lime, and raspberry), the candy is distinctive mainly for its creeping, buck-toothed Mummy image on the box. Each piece has only 6 calories, but a serving size of 23 pieces packs 140 calories.

A favorite of pop phenomenon Justin Bieber, Peeps chicks dipped orange for Halloween are about 54 calories each (regular, non-dipped Peeps are 28 calories each) and are sold in three-count packages.

Fun fact:  The technological wizards at Peeps have cut the manufacturing time down to six minutes to make one marshmallow chick, down from 27 hours in 1953. Their wings were “clipped” in the 1950s to give them a “sleek, modern look.”

A Halloween pumpkin two-pack has 160 calories while the “fun size” kids will hopefully find in their treat bags has 85 calories.

Fun fact:  The term “butterfinger” dates from the 1920s and ’30s when sportscasters used it to describe athletes who couldn’t hold on to a baseball or football.

The peanuts, caramel, and chocolate-flavored nougat in this 90-year-old candy bar come in a 52-calorie fun size at Halloween.

Fun fact:  Many people associate this candy bar with legendary baseball player Babe Ruth (the candy’s web site does feature a baseball stadium), but it was actually named after President Grover Cleveland’s daughter, who was often called “Baby Ruth.”

The signature candy of Goetze’s Candy Company has caramel wrapped around a cream center. Three pieces of the caramel apple flavor (appropriate for fall) have 130 calories, and one piece has 43 calories.

Fun fact:  The original “Caramel Creams” were first made by Melvin Goetze in 1917 and reached consumers in 1918. Over the decades, they’ve had a number of names, including Chuees, Bulls-Eyes, Daisy’s and Caramel Kisses

Fun fact:  According to Beth Kimmerle, author of Candy: The Sweet History, M&Ms were originally developed as a easily transported, energy-laden rations for soldiers during World War II. They were packaged in slim tubes designed to slide easily into the pockets of cargo pants. But when troops came home, they still wanted the candy. “There you have the start of a very popular candy and one of the everlasting favorites,” Kimmerle says.

A later invention of the Goetze Company, Cow Tales are essentially an elongated version of Caramel Creams, hence the moniker. One caramel apple Cow Tale: 110 calories.

Fun fact:  Goetze’s still makes candy in its original early 20th-century plant in Baltimore, Maryland, complete with tanks for fresh cream and sugar in the back of the building, says Kimmerle.

The family-owned Boyer Candies makes this confection of chocolate surrounding a whipped marshmallow center. One cup has 100 calories.

Fun fact:  Two brothers started Boyer Candies in their mother’s kitchen during the Great Depression. The cup started out as a bar and was sold mostly at carnivals and amusement parks. The brothers first tried covering marshmallows in chocolate as a bar, says Kimmerle, but it wouldn’t stiffen. Sister Emily suggested using a cup and Mallos became the first cup candy in the U.S.

Eight flavors of Airheads are available all year round, including cherry, though special, limited-time flavors come out three times a year. The company won’t reveal the magic ingredient in the “White Mystery” flavor. A half-ounce cherry bar has 45 calories.

Fun fact:  Airheads for the U.S. are made in Kentucky by Italian conglomerate, Perfetti Van Melle, the world’s third largest confectionery company. The bars are made in machines not too different from those that create and spit out different shapes of Playdoh.

You may be more familiar with Gummy Bears, but at Halloween, it’s the body parts that matter. One eyeball along with one finger, foot, nose, and mouth, all available in a variety pack, will cost you 120 calories.

Fun fact:  The gelatin-based candies originated in 1922 in Germany, where they are called “Gummibar” (rubber bear) or “Gummibarchen” (little rubber bear). They’re made in little plaster molds, poured, dried, and coated in beeswax.

A Halloween variation on the Easter favorite, Screme eggs are individually wrapped and contain about 170 calories.

Fun fact:  Although it may not be documented, the green “yolk” in the milk chocolate egg is reminiscent of Dr. Seuss’s classic Green Eggs and Ham, says Jon Prince, president of Candy Favorites, one of the oldest candy wholesalers in the U.S.

Hershey’s wrote the book on candy and this iconic candy bar might as well define the company. The Halloween mini-bar comes wrapped in orange, black, purple, and lime-green foil and has about 65 calories, a whole lot less than the 900 or so calories in an 6.8-ounce Giant Bar.

Fun Facts: The first Hershey’s milk-chocolate bar rolled out in 1900, three years before ground was broken for Milton Hershey’s first factory. Almonds were added to the recipe eight years later.

The prototype for this twist on old-fashioned licorice appeared in 1845. One piece of the strawberry-flavor candy is 50 calories.

Fun fact:  During his historic moon landing in 1969, Astronaut Neil Armstrong allegedly said, “I could sure go for some Twizzlers right now.” Black licorice originally came from Asia and has medicinal properties.

Available in orange and black for Halloween—of course—these favorites may pack the most bang for your buck, calorie wise: Only 41 calories per 10 nuggets, or 4 calories each.

Fun fact:  Ronald Reagan started eating jelly beans after he was elected governor of California in 1967 as a way to quit smoking a pipe. Three-and-a-half tons of Jelly Bellies arrived at the White House for the 1981 presidential inaugural parties. A blueberry flavor was developed specifically so the decorations could include red, white, and blue jelly beans, though Reagan’s favorite flavor was licorice.

Peppermint and dark chocolate make up this treat, which is a favorite of moviegoers everywhere. At Halloween, a snack-size box contains 80 calories.

Fun fact:  The candy was featured on a Seinfeld episode when Kramer and Jerry accidentally knocked a Junior Mint into a patient’s chest cavity during surgery (the patient recovered). The candy is named after the Broadway show Junior Miss, popular in 1949 when the candy debuted.

One large caramel lollipop packs 170 calories, but you can get 30 pieces (one box) of Daddy’s progeny, Sugar Baby, for about the same amount.

Fun fact:  When invented in 1925, this candy was called the “Papa Sucker,” but changed its name in 1932 to “Sugar Daddy,” meant to suggest “a wealth of sweetness.”

The world’s favorite gum comes with only 20 calories which, if you chew long enough, could end up eating more energy than it provides.

Fun fact:  Dubble Bubble was created in 1928 by an accountant and featured two comic-strip characters, brothers Dub and Bub. Like M&Ms and Tootsie Rolls, it was found in military rations during World War II and was part of the first-ever gum five-pack in 1957.

One miniature version of this crispy wafer coated in milk chocolate has just 40 calories.

Fun fact: Although a Nestle product in most of the world, Kit Kat is licensed under Hershey in the U.S. The name is believed to come from the 18th century “Kit Kat” literary club in London.

A mini Chupa Chups lollipop has 24 calories or you could try the sugar-free variety, which has 26 calories.

Fun fact: Creator Enric Bernat wanted to avoid the sticky mess most candy leaves behind so he invented a candy that was “like eating a sweet with a fork.” The lollipop celebrated it 50th anniversary in 2008.

These lollipops still have the fruit flavor of the traditional chewies; one pop contains 60 calories.

Fun fact: Jolly Ranchers were first invented in 1949 by husband-and-wife team Bill and Dorothy Harmsen, who were based in Golden, Colorado. Today, the company is owned by Hershey.

Fun fact: The Nestle-owned company is named after peculiar candy-maker Willy Wonka, the fictional character from Roald Dahl’s classic children’s book, Charlie and the Chocolate Factory and played by Gene Wilder in the 1971 movie (and by Johnny Depp in the 2005 remake).

Try one fun-sized pack for 60 calories.

Fun fact: Skittles were first sold in Europe in 1974 and crossed the Atlantic to the U.S. in 1979. More than 200 million of the tiny round candies are produced every day and it can take eight hours to place the candy coating around the fruit center.

A year-round favorite, these 75-calorie truffles can be found in the gourmet section of the candy aisle.

Fun fact: A father and son duo started this company out of a pastry shop in Zurich in 1845. The Before this team popularized solid chocolate bars, chocolate was mostly known as a drink.