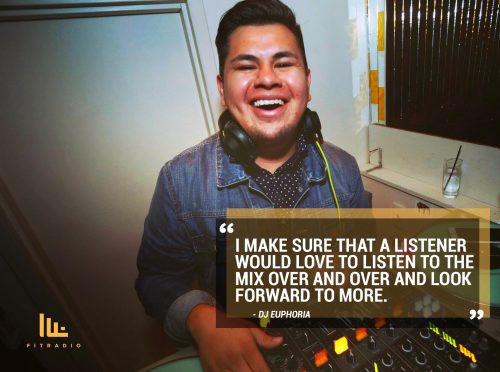 This week, we had a chance to sit down with DJ Euphoria and ask him a couple questions. Here is what he had to say:

1. How would you best describe yourself in three words?

2. What is the most embarrassing thing that has ever happened to you?

It was picture day in middle school and my mom decided she was going to start cutting my hair herself. Let’s just say, I came out looking like I went to a blind barber. She still made me go to school wearing a hat, but little did she know hats weren’t allowed at school. (Like I told her!) I got called so many names that day and ended up getting my head shaved completely bald. We didn’t purchase the pictures that year. 😉

3. Who is or was your celebrity crush?

4. If you could read minds, whose would you want to read?

DJ AM – his music selection and live mashups were unreal. A true legend.

5. What is the most important thing to you when you make a mix for Fit Radio?

I always put myself in the user’s shoes. I make sure that a listener would love to listen to the mix over and over and look forward to more.

Learn more about DJ Euphoria and listen to his latest mixes here.

Today’s featured new mix is sure to make you want to move whether it’s on the treadmill, or elliptical, getting ready in the morning or getting steamy dancing in the kitchen while making dinner. If you need upbeat, current hits to keep you going, this mix is for you! END_OF_DOCUMENT_TOKEN_TO_BE_REPLACED

Well if I had to sum up this week’s MixLab in one phrase it would have to be, “anybody want some weiners and balls?” You can thank DJ Mami Chula for that one! She had purchased a barbecue platter of sorts for the DJs which consisted of mini sausages and meatballs 🙂 ANYway, back to the MixLab recap! We had a new group of DJs and they were super excited to work together and make a brand spankin’ new collabo’ mix for the users as well as partake in jäger bombs and provisions alike. Did I mention we were streaming the whole thing live? I’ll have a link to that video for you guys on Monday so be sure to check back!

The USTREAM live feed went so well we decided that it’s more than likely going to be a staple for the FIT Radio MixLab so if you missed out this week, have no fear because it will be back 🙂

Check out the mixes from this week’s DJs and don’t forget to favorite the ones you love!