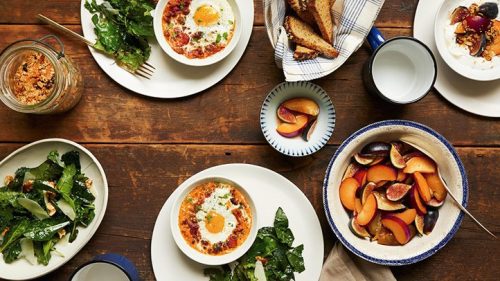 If you’re a fan of weekend brunch, you already know that it can be an easy meal for splurging. After all, it’s usually a laid back, lengthy affair where it’s tempting to have a cocktail and an indulgent entrée — especially if you’re dining out — as well as other treats you wouldn’t normally have during the week. But if you’re health-conscious, you don’t have to choose between enjoying a delicious brunch and skipping it altogether! Use these expert-approved tips to navigate the brunch menu the healthy way.

“Liquid calories add up fast,” says Frances Largeman-Roth, RD. Aim to order just one alcoholic drink for the duration of your meal, and be sure to sip plenty of water. “I’d stick with straight up champagne if you’re looking to keep calories in check; one 4-ounce glass has just 84 calories. And skip mimosas: They’re generally made with cheap sparkling wine and additional sugar in the form of juice,” she says. Bellinis, margaritas, and other drinks made with premade mixes are an easy way to tack on loads of sugar to your meal. “But if you’re making brunch at home and want to make your own fruit puree with no additional sugar, or homemade Bloody Marys with tomato juice and spices, those can be a healthier additions — just remember to limit it to one,” says Largeman-Roth.

Don’t Shy Away From a Favorite

Two brunch standbys, pancakes and waffles, are obviously going to be on the heavy side — and that’s okay. “If you want pancakes or waffles, get them,” suggests Largeman-Roth, who notes that there’s virtually no difference healthwise between the two — as long as the waffles aren’t Belgian-style. “If the pancakes are whole grain or buckwheat, they’ll be more nutrient-dense than the waffles. But if not, they’re pretty equivalent calorie-wise,” Largeman-Roth says. When it comes to the toppings, skip the butter. And instead of adding sugary “fruit” syrups or whipped cream, ask for a side of fresh fruit and pour that on top for sweetness. But watch those portion sizes: One or two small pancakes or waffles is fine, but if they’re the size of your whole plate, more than one pancake or waffle is too many.

Create Your Own Omelet

Both nutritionists we spoke to gave an order of eggs a grade A in terms of nutrition. “An omelet is a great way to get in lots of food groups, including vegetables and dairy,” says Jessica Fishman Levinson, RDN. She recommends asking for a combination of high-protein egg whites and yolks, which contain vitamin D, choline, and B vitamins. “Often, omelets are made with 3 whole eggs, so ask for 1 whole egg and 2 egg whites,” she says. This will allow you to cut back on calories while still getting the health benefits of the nutritionally-rich yolk. Smart ingredient picks include spinach, mushrooms, peppers, tomatoes, onions, and even a dash of cheese. Avoid roasted vegetables, like peppers, that are marinated in oil, as well as fattening bacon or sausages (choose turkey bacon or ham instead).

Speaking of eggs, keep in mind that more elaborate egg dishes, like eggs Benedict or huevos rancheros, tend to pack loads of calories and fat. “Unless you’re making either of these entrées at home, they’ll both weigh in at over 500 calories at most restaurants,” says Levinson. Still, she adds, huevos rancheros is your better bet since it’s a bit more nutritionally balanced than eggs Benedict, which typically comes drenched in heavy hollandaise sauce. When ordering huevos rancheros, ask for black beans instead of refried, and get a side salad instead of the typical side of rice to help keep calories in check, says Levinson.

Size Up Your Sides

Potato sides like home fries and hashbrowns are usually served with a side of toast, but Levinson recommends choosing either whole-grain toast or the potatoes — not both. “Otherwise, you end up with too many carbs on your plate,” she says. In place of potatoes, Levinson suggests asking for sliced tomatoes or a side salad to add some low-calorie, high nutritional value to your meal. Many brunch places offer seasonal vegetables prepared different ways, so look for something you like that’s prepared by steaming, grilling, or roasting (without butter or oil).