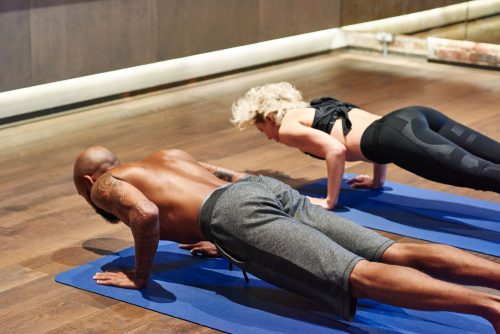 Walk into your average sweatbox and it’s a safe bet that you’ll see guys grunting in the free weights area whilst girls hog the cardio machines. It’s partly because they have diverging goals, but it’s also socialization. Hence the advent of pink kettlebells and “broga”: we’re so conditioned to what athletic pursuits are considered suitable for our respective gender that we rarely think to question them.

But the gender boundaries are being redrawn. Big-box gyms are being superseded by class-based boutique studios where gender is mixed – although they’re still mostly women, as they’re more inclined to do classes than men. Disciplines may still identify as “masculine” (eg calisthenics) or “feminine” (eg spin), but aren’t there benefits for working out in ways we class as being for the opposite gender? It can mean greater flexibility for men and increased strength for women.

To find out where contemporary opinion lies on the gym floor, Amuse spoke to Jermaine Hunter—a trainer at east London’s above-average Blok—where the Dan Flavin-inspired lighting is as considered as the instruction.

Get your priorities right
“Women are always looking for abs, while men are looking for strong “levers”, plus a big chest and shoulders. Over time, guys might get big up top, but they tend to neglect the lower body. And because of the culture of putting on muscle and weight, they have too much fat in the abdominal area. Whereas ladies neglect their levers, then they complain about their arms being a bit flappy.”

Don’t skip on leg day, bro
“You have two types of fitness: aerobic, which is more cardiovascular, and anaerobic, which is resistance. If you combine the two, you get good results in your legs. Skip, then do some squats. After that, some lunges. After that, maybe some SAQ [Speed Agility Quickness] ladders. Load your legs up and then move them again. It’s not about going really heavy and then tomorrow you can’t walk.”

Stretch yourself
“When I go to the spit and sawdust gyms, I find the big guys’ breathing is really bad. So I say to them: ‘Try a yoga class.’ If you’ve got a heavy weight on your chest and you can’t move it, because there’s no space, your breath will help you create space. So stuff like that is useful to guys. Yoga is more than just stretching: it’s a method in which to move your muscles and to feel them.”

Ladies lift too
“Women always say, ‘I don’t want to get big arms.’ It takes a lot of work to get big arms. You can’t do it by accident, and without pushing loads of weight, or eating a lot. For me, it’s about breaking down those misconceptions. Now I’ve been at Blok a while, I have a lot of ladies in my calisthenics class, and a lot of guys in my aerobic, functional fitness class, because they want to shift the pounds.”

Change your attitude
“Women generally haven’t been taught the basics of strength training, so they take a while to become confident with it. A lot of the ladies in my class say negative things at first: ‘I can’t.’ Whereas with the men, their personality and attitude is more positive: ‘I can. I’m going to try – even if I fail.’ But then again, I always motivate them. I’m always like, ‘Yes, you can.’ I’m like Obama…”

Be a basics bitch
“The things women should focus on first are press-ups, dips, single-leg squats, balance work and flexibility. Then you’ll soon want to build from there. There’s a skill that I use in a lot of my classes called the L-sit: it looks like you’re defying gravity, and like you have to be really strong, but you can graduate to that from floor work in 4-8 weeks. Guys and girls both find it hard, but both progress in it.”

Build strength in numbers
“I don’t know what it is but I just feel women are more open to the idea of doing classes. It’s like asking for directions: I think some men prefer to stick to what they know, which is going into a gym, lifting what they have to lift and getting out. But I would recommend they try some classes. You might learn something, and you’ll actually be motivated; you’ll be pushed. And that’s what it’s about.”=

Hit the massage parlour
“Calisthenics is a good way to counteract phone neck and keyboard back, because hanging stretches your spine out. But you have to get a massage at least once a month. Because it’s not just a massage. Your practitioner is going to identify why, help you feel when you’re slouching so you’re more aware of it and give you corrective exercises. And where else are you going to release that tension?”