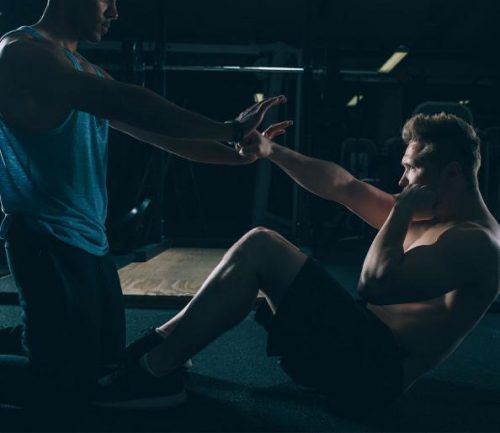 Here’s why hitting the gym with a workout partner is a good idea.

Don’t feel like working out after work? It’s one thing to cancel plans with yourself—it’s another to cancel on a friend or partner who’s counting on you. “No one wants to be Debbie Downer by bailing and letting down your friend,” says Steve Stonehouse, personal training manager at Crunch in New YorkCity. You’re much more likely to meet your friend for a planned workout session at 6 p.m. compared to tentative plans you made with yourself for, say, sometime after lunch.

“After three or four weeks, once you’re in the habit, you won’t even think about canceling on your friend,” adds Stonehouse. (But if your main man keeps bailing on you, then you might be better off picking a new gym partner.)

2. YOUR WORKOUTS CAN BE MORE FUN.

News flash: The treadmill and the bench press aren’t the most exciting ways to pass the time. With a partner, though, you can get your heart racing with some one-on-one basketball, racquetball, or even just a partner workout like the ones in our three-day program for training partners.

“You can also take turns leading new exercises and switching up the routine,” suggests Stonehouse. Maybe you know a brutal leg lunge that you used to do on your own? Teach it to your buddy one day, and the next, let him teach you something new. “Your body adapts and becomes efficient at moves that you’ve done again and again,” says Stonehouse. “The more you change up your workout, the better your body is going to respond.”

“Whenever you’re working out with someone else, the intensity is always going to be greater than when you’re alone,” points out Stonehouse. (You don’t want to be the wimp who can’t keep up with a seven-minutes mile.) One key tip when picking your partner: Your athletic abilities should be in the same ballpark. A more seasoned gym-goer won’t get as much out of working out with a newbie, while a beginner can find it frustrating if he’s only doing a third of what his partner can do.

“If you’re on the same level, you can push each other,” Stonehouse says. Odds are, you’ll both want to quit around the same time but you’ll go a little longer if your friend is still at it.

4. YOU’LL FINALLY BE ABLE TO AFFORD A PERSONAL TRAINER.

Sharing a cheeseburger is cheaper than buying one yourself (and fewer calories). The same math applies when it comes to a personal trainer. At Crunch, for example, a one-on-one session costs about $85, but a partner training session runs around $50 per person. “One-on-one training is still the bulk of my day, but I’m seeing more and more partner training for financial reasons alone,” says Stonehouse.

5. YOU’LL ALWAYS HAVE A SPOTTER.

It’ll also save you from forced reps: “Let’s say you’re on the bench press and you want to stop at 10 because you’re not sure you can make it to 11,” Stonehouse says. “If you have a spotter, you don’t have to worry as much. You’re more likely to power through the 11th, 12th, and 13th reps—and each of those little lifts will add up and make a difference.” Use your spotter to keep an eye on your form as you work, too.

6. YOUR FRIENDS WILL BE THINNER.

Before you judge us, we’re not being totally shallow here—having thin friends is for your own good. Researchers at Harvard University found that you can “catch” obesity (along with smoking habits and happiness) because it spreads like an infectious disease. The experts found that a person’s risk of becoming obese rises by two percent for every five obese social contacts they have.

Fortunately, the reverse is true, too. Overweight people tend to lose more weight if they spend time with their fit friends—and the more time they spend together, the more weight they lose, according to a 2016 study published in the journal Obesity. “If you’re surrounded by people who are active and eat well, there’s a good chance you’re going to do the same,” Stonehouse says.